When you book with an account, you will be able to track your payment status, track the confirmation and you can also rate the tour after you finished the tour.
Sign Up

Or Continue As Guest

When you book with an account, you will be able to track your payment status, track the confirmation and you can also rate the tour after you finished the tour.
Sign Up
3111

Visit Madrid and cycle your way to Segovia and Toledo on the ideal biking trip that takes in the best of the Spanish capital and its surroundings. After soaking up the sights and cultural delights of Madrid, what better way to discover the best of its surroundings than on a cycle tour that offers excellent hotels, outstanding cuisine and six hundred years of Spanish history.

Toledo! Segovia! Museums! Monasteries! The Sierras! How do you select a bicycle tour that allows you to see all the great sights of Madrid and its surrounding regions without sacrificing time in the saddle?

Easy. Our Madrid, Toledo and Segovia tour gets you out of the city to experience the beauty of Madrid’s surroundings by bike – the Monastery of El Paular, the Aqueduct of Segovia, the narrow and winding alleys of Toledo.

We connect the most famous sites with narrow country roads and forest paths to create a tour that combines the best of both worlds within an hour’s drive of the Spanish capital.

Guests of Bike Spain Tours are taken by van to Pedriza National Park where we fit the bikes and make the first test ride to Miraflores de la Sierra. On the route we will pass by the impressive 15th century castle of Manzanares el Real. Once we arrive at the hotel and have had a chance to unpack, we’ll have a welcome drink, and provide you with the road book and maps for the tour.

After breakfast, we’ll drive to the top of the Morcuera Pass to ride down and through the beautiful Lozoya Valley and visit the El Paular monastery and ride along the edges of the Pinilla Reservoir. Then we’ll take the van over the Navafría Pass and ride along the northern flank of the Guadarrama Mountains, travelling through oak and pine forests on back country roads to the town of Pedraza, a perfectly preserved medieval town, complete with castle. We’ll have lunch in Pedraza and travel by van to Segovia, where we’ll stay the night in a historic hotel located in the city’s Plaza Mayor, after you´ll have a chance to visit Segovia’s cathedral and Alcázar.

Segovia’s ancient streets and medieval neighborhoods provide a great place to start today’s riding. We’ll pass along the ancient city walls, under the world-famous Roman aqueduct and go by some marvelously old monasteries as we travel around the city and head towards the town of San Ildefonso de la Granja, built by the first Bourbon monarchs of Spain, who were determined to re-create a little piece of Versailles in the dry plains of Spain. From there, we’ll drive to the town of El Escorial and visit the Monastery of San Lorenzo. Built between 1563 and 1584, the Monastery was the biggest building of the Renaissance period.

The mountainside setting of El Escorial is a favorite location for cycle tourists and road bikers alike; once we’ve had the chance to explore the area surrounding the San Lorenzo Monastery, we’ll make our way by bike south along quiet, country roads passing through charming small towns and we’ll finish in the of wine region of Mentrida. From there we will transfer by van to the world-famous city of Toledo, which was the capital of the country in the 15th century and was once the most famous seat of learning in the peninsula. Every square inch of the hill rising from the banks of the Tagus River has been built upon, and the city is home to innumerable convents, churches, museums, synagogues and palaces. Take the afternoon to discover the narrow alleys and hillside staircases that have inspired everyone from artist El Greco to novelist Noah Gordon.

Toledo was the capital of medieval Spain until 1560. It sits on a rocky mound isolated on three sides by a looping gorge of the river Tagus. Every available inch of this outcrop has been built on: houses, synagogues, churches and mosques are heaped upon one another in a haphazard spiral.
Toledo is the most significant of all cities with a strong Jewish, arab and Christian heritage at same time.

This morning we have a quick transfer by van from Toledo to the town of Aranjuez, where we will view the impressive grounds of the 18th-century Aranjuez Palace. Our bike ride will start just 6 km outside of Aranjuez in the settlement of the Real Cortijo de San Isidro. This area is notable because it was built as an experimental agricultural station in 1766 during the Enlightenment, which was inspired by King Carlos III, an enthusiastic physiocrat who was persuaded that the value of his kingdom lay more in its lands and people than in the gold and silver stored in its treasury. From here we bike to Chinchón, which has one of the prettiest town squares in the region and we continue the ride through the rolling countryside to lunch in Morata de Tajuña passing by wineries, olive grove and melon farms. After lunch it’s a quick van transfer back to the Parador of Chinchón. Free afternoon and we will have a last dinner with your guides in the unforgetable sqaure fo this nice town.

Hotel not included. We help make reservations at the hotel of your choice.
The final day of the tour gives you the chance to discover Madrid on your own, either on foot or by bike. There’s so much to do that it almost seems unfair to list all the possibilities, but favorites of past participants – and of most visitors to Madrid! – include the Big Three museums (the Prado, the Thyssen-Bornemisza and the Reina Sofía), the beauty of the Retiro Park, or the wide open spaces of the Casa de Campo Park (perfect for those who’d like a spin on a mountain bike!) In the evening, you’re free to go on your own tapas crawl, take in a flamenco show or see something cultural at the Teatro Real or the Teatro Nacional (we’ll be happy to make the reservations for you).

Hotel La Muñequilla is situated in one of the most beautiful corners of the Madrid mountains.

Through forests of oak and pine groves that rise almost to the top of the mountains , is the village of Miraflores de la Sierra , a privileged place in the border of the National Park of Guadarrama. The hotel has a lounge with fireplace Twenty-Four charming rooms, and a sunny terrace in addition to the many possibilities offered by the captivating wild environment.

It is located 10 minutes walking from the aqueduct and the main square.

Hotel San Antonio El Real is the accommodation that you are looking for: with a wealth of detail and an impeccable cuisine, it is located in a part of the San Antonio El Real Monastery, a National Monument of a beautiful city deemed as a World Heritage Site. Fully-equipped bedrooms, with Hispanic-Muslim art, boast some of the most modern services and facilities, which include a spectacular garden-cloister and the famous Cloister of San Antonio El Real and Restaurant. History, high cuisine and comfort get together.

As traditional as it is avant-garde, as classic as it is bold. Located in the historic centre of San Lorenzo de El Escorial, the building’s design blends with the classicism of the surroundings, providing the hotel with an atmosphere of exquisite elegance.

The facilities at Victoria Palace Exe make staying at the hotel an excellent experience. Thus, you can enjoy quality cuisine in its restaurant, relax while you browse the press in its café-bar or enjoy sunny days in its magnificent outdoor pool.

The building is spectacular and you can see the World Heritage City not only from the swimming pool, but also from the function rooms, terrace and guest rooms

At the Parador de Toledo, you will enjoy spacious, luxurious facilities. The comfortable furnishings combine with wooden beams, staircases, wooden railings. The warm and cozy guest rooms will envelop you, offering gorgeous views of the Imperial City.

Located in a former Augustinian monastery. It offers large windows, beautiful common areas and guest rooms decorated with exquisite taste. The lovely courtyard filled with loquat trees and well-kept gardens will allow you to enjoy this peaceful location.

Highlights include the Plaza Mayor (Main Square), with more than 230 wooden balconies on the surrounding houses. We recommend viewing it at night: the illumination makes it a distinctive sight.  ncestral homes, gorgeous courtyards and galleries supported by lovely columns make Chinchón a uniquely beautiful town.

Please specify above the number of participants to the tour before adding to the Cart.
SKU: MAD18SEG Category: Spain / Guided
Additional information 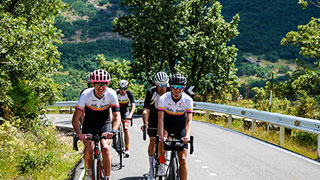 Vuelta a España – the best memories