When you book with an account, you will be able to track your payment status, track the confirmation and you can also rate the tour after you finished the tour.
Sign Up
5140

This bicycle tour takes you through some of Andalusia’s most stunning regions, following the route favored by the Arab Caliphates during the 11th and 12th centuries.

Given its location at the western end of the Mediterranean, it’s not surprising that so many cultures – Moorish, Visigothic, Roman and Greek – have crossed paths in the southernmost part of Spain. This bike tour in Andalusia follows the paths of the Caliphs – the chief civil and religious ruler of the Muslim faith, regarded as the successors of Muhammad – and of Washington Irving, most famous as the creator of “The Legend of Sleepy Hollow”, but who stayed in the Alhambra Palace while serving as the American ambassador to Spain in the 1840s.

Our bicycling routes include an old rail track perfectly adapted for pedaling on smaller country roads and paths. We stay in outstanding accommodation: four-star hotels in the bigger cities and smaller hotels with their own special charm in a few picturesque Andalusian villages. You will encounter olive groves, wineries, flamenco, Arab baths, white towns decked out with heaps of geraniums, castles and so much more!

This is a perfect cycling route to experience traditional Andalusian cuisine with excellent wines. We use our Bike Spain minibus for half of the journey to arrive at the starting points of each one of our stages. We’ll ride the most interesting parts of our journey and each day’s stages may be lengthened or shortened depending on the group’s cycling abilities.

In the morning you will meet your guide at your hotel. We will leave Madrid early in the morning to travel south from the city, making a stop along the way in the land of Don Quijote, La Mancha, to see the ancient windmills made famous by the novel. Alternately, if you would like to explore the quaint streets of Cordoba by day, you have the option to catch the fast train from Madrid in the morning and we will meet you in Cordoba in the evening. That night, we’ll immerse ourselves in Spanish culture with a tapas dinner.

Ten centuries ago, Cordoba was one of the greatest cities in the world and the capital of Muslim Spain. Today Cordoba is well-known for its mosque, the famous Mezquita that we will visit on arrival, and also for many other artistic and architectural treasures. The old Arab and Jewish quarters with their narrow streets offer the visitor a unique experience.

After breakfast this morning we will transfer by van out of Cordoba to make our way south towards the natural park of the Sierra Subbetica Mountains (45 minutes). This first biking route will make you discover the vineyards of the area to finally arrive to a traditional, family-run country estate in Montilla that has been making wine and olive-oil for many generations. After learning some of the secrets of their trade, we will share a really private lunch in their property with excellent wines. We will then take the van to our next hotel, a beautiful property set in an impressive rural location where you will enjoy fantastic views and a nice pool. Arab baths and massages are also available.

For the most courageous ones, an extra ride of 15 kms is available this afternoon.

Tonight, we will enjoy dinner in the excellent hotel’s restaurant.

The natural park of the Sierra Subbetica mountain range is home to some of the most beautiful landscape in Andalusia, and we’ll get to see some of it today as we ride to Luque, famous for the imposing ruins of its Moorish castle and to Priego de Cordoba, known for its 17th and 18th century palaces, where we will stop to visit and enjoy the small flowery streets. Today is about enjoying the olive trees and the quiet roads that curve through the mountains as we bike south towards the valley of the river Genil. We will finish our ride in the nice lakeside village of Iznájar, where we will have lunch before a quick transfer to the amazing Hotel La Bobadilla, a luxurious 5-star, where you can enjoy a swim in one of the extensive pool it boasts.

After breakfast, we will start riding directly from the hotel on a circular route through the olive trees that will lead us to Riofrío, a nice village well-known for its caviar. After a visit to a fish farm, we will taste this local specialty and enjoy a nice lunch. We will go back to our hotel La Bobadilla by van but you also have the possibility to ride back to the hotel.

This afternoon, why not enjoying a treatment in the spa before dinner in the classic Andalusian patio of the hotel restaurant?

This morning we will transfer by van from La Bobadilla towards Granada stopping in the picturesque town of Montefrio, which sits at just over 830 m above sea-level and enjoy one of the region’s most striking settings. Starting the bike ride from here we make our way through rich farming countyside with scenic views as we head towards the city of Granada. The ride will finish at the Cubillas Reservoir where we will share a typical Spanish lunch by the lake.

Tonight you will enjoy a tasty tapas tour of Granada with your Bike Spain guide for the final night of celebrations after your week of biking!

After a goodbye and an explanation of today’s activities, your guide will head back to Madrid. You will stay one day more in Granada on your own. No visit to Andalusia would be complete without taking a half-day to explore the centuries-old hallways and gardens of the Alhambra Palace, the most complete and beautifully restored Moorish building in Western Europe. We include the tickets and the guided visit in English. After exploring the Alhambra (and reveling in the views from the Palace’s battlements), you’ll explore the atmospheric Albayzin neighborhood.

At sunset, you can go to the Mirador de San Nicolas to get the most perfect view of the Alhambra’s red walls, backed by the snow-topped peaks of the Sierra Nevada. An unforgettable moment on your bicycling tour through Andalusia!

There are many options for your departure today from Granada with good train connections to many other cities in Spain or a regional airport with flights to Madrid, Barcelona and Palma de Mallorca.

Please get in touch with us if you need assistance with your onward plans.

This hotel stands right at the opposite of the Alcázar de los Reyes Cristianos, Royal Mews, the Baths Caliph of the Campo Santo of the Martyrs and the Synagogue, 200 meters Mosque Cathedral of Cordoba and the Cordoba Congress Centre.His rehabilitation as a hotel has been carried out with the utmost respect for history and architecture of the building, resulting in a singular charm hotel with all facilities and services required by the traveler, in an environment of great beauty, to enjoy of peace and tranquility.

This stylish hotel was created out of a country estate dating from the late 19th century, and its original features, including the historic oil mill, have been preserved.

The rooms are typical farmhouse style, and the parlor has a large fireplace flanked by panoramic windows framing a gorgeous landscape. The hotel also has Arab baths and massage rooms.

Set in its own 350-hectare estate, the luxurious Barcelo La Bobadilla resembles a Moorish village of white-walled buildings with tile roofs and patios evoking the different cultures that have left their mark on Andalusia.

Literature, romanticism and comfort combine at this fantastic luxury hotel, which has been decorated to reflect the works of American writer Washington Irving.

The rooms and common areas of this dream hotel recreate sentences and passages from works like Tales of the Alhambra, making it a warm, welcoming place where guests are enveloped in the romanticism of the 19th century. 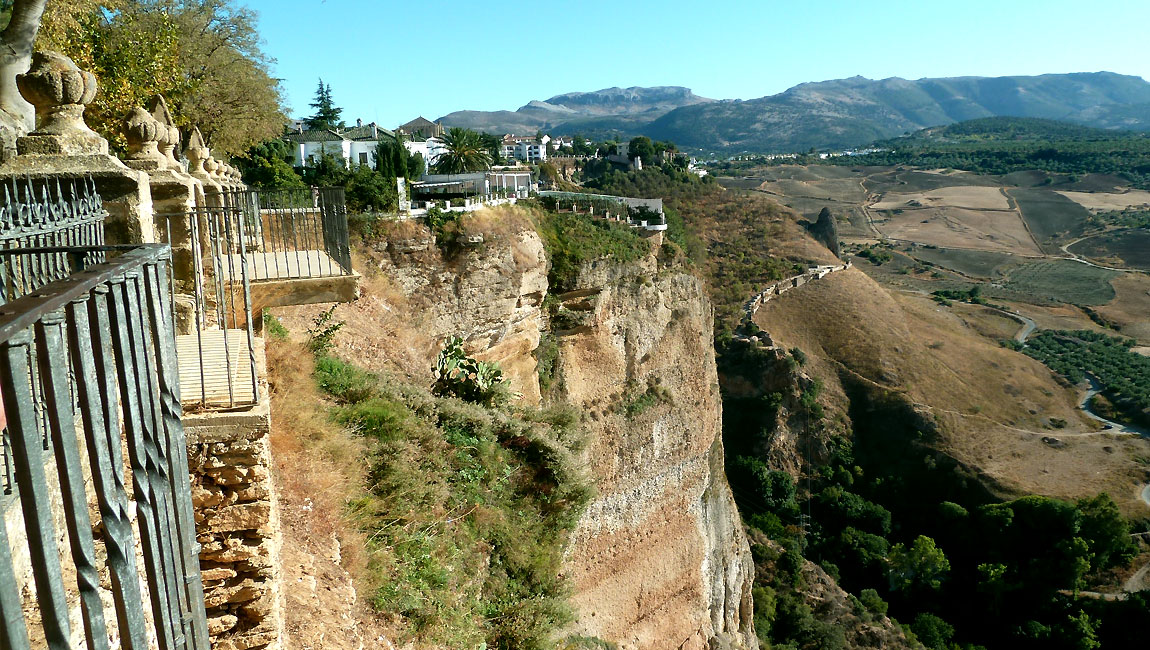 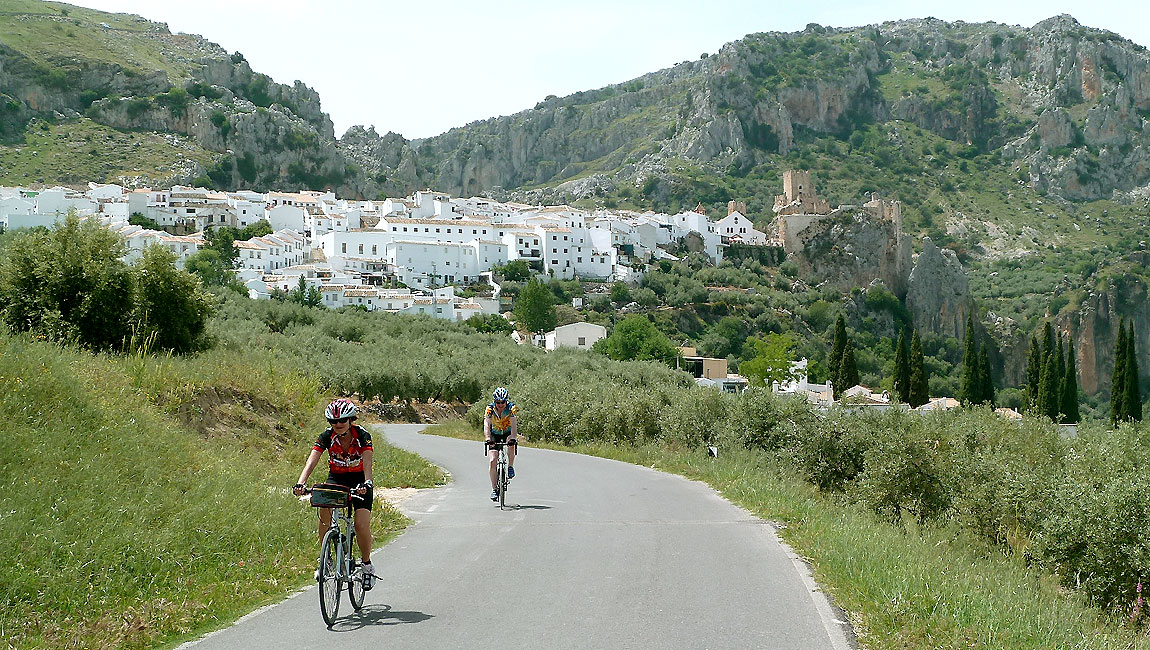 Please NOTE: Although this tour has been designed for a week’s worth of travel, it can easily be expanded to include towns and areas around Seville and Málaga. If your group would like to explore Andalusia in more depth, please contact us: we’d be delighted to specially design a tour that introduces you to the region’s historical and cultural treasures.

Please specify above the number of participants to the tour before adding to the Cart.
SKU: AND18GRA Category: Spain / Guided
Additional information

Every day was a memorable experience. it was my first time in Spain and i cant wait to return.

We thoroughly enjoyed our travels with bike spain (we are not back in NYC).
Nikki and Roberto were very professional and accommodating and contributed to what was a really great trip.
One thing we wish we’d thought of before the trip was the advantage of an ebike.  Two of the five on our tour used ebikes, and if we’d known that we may have considered using an ebike.  That said, we highly recommend Bike Spain to everyone!We felt the choice of hotels and restaurants was excellent (altho we wished for earlier eating times – 8pm is late for us!).

Thanks again for a pleasurable week with your team!